Let us consider a system that can take a finite number of states S[1] to S[n] over time.

We can represent the system as a N-node directed graph, where nodes are the states. An arc exists between node S[i] and S[j] if the system can transition from S[i] to S[j]. You probably already know that.

By the way, this is called a Markov Chain.

Now let's complicate things a little by introducing a separate system that can take states V[1] to V[M]. This second system V is tied to S: at every tick t, the probability distribution of V(t) only depends on S(t). We will note: O(i,j) = P(V(j) | S[i]).

You can think of V as something that observes S and reports on its state in an incomplete and probabilistic manner.

Now, add more possible colors to S and V, not necessarily the same number for both, to generalize the system.

Now, here is our problem: imagine that you know how system S works (the probabilities of transition between the states) but that it is hidden in a black box such that you cannot observe it. What you can observe is system V. Is there any way to guess what system S is doing at any time in this setting? If yes, how?

The answer to the first question is: "sometimes, yes". "Sometimes" means "if the probability distributions help us".

The second question is the one my favorite algorithm, the Viterbi algorithm, answers. Let's see how it works.

First we need to represent the problem in a way that can be understood by a computer. I will use the Lua programming language for that.

We start by defining a few parameters. We will choose N = 3 and M = 2 for simplicity. We will observe the system over 1000 ticks.

The probabilities of transitions in S will be represented by a NxN matrix, with P(i->j) as T[i][j]. We use percentages because they are easier to read and avoid some floating point calculation issues.

The probablitities of observations will be represented by a NxM matrix, with O(i,j) as O[i][j].

Let us make sure we didn't make too many mistakes thanks to our two probability equations from earlier:

This is what our example system looks like in graph form: 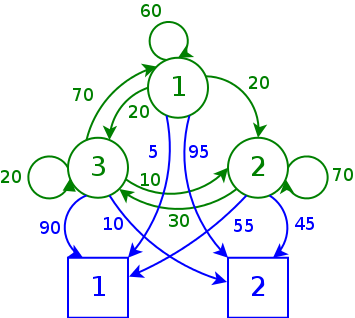 The green part is the Markov chain itself, the blue part corresponds to the observation device. Arcs are labeled with probabilities of transition or observation.

Now we can simulate the behavior of the system.

This code is slightly more complicated, but what you should understand is that, at the end of it, S is a vector of L states of the system and V is the corresponding vector of observations. The initial state S[1] is chosen randomly with uniform probabilities.

Seeing Through the Box

Now, let us proceed to guess what happens inside the black box. We do so iteratively: at each tick t, we calculate the most plausible sequence of events that could have led to each possible state of the system, given the observation at t and the results for t-1.

Again, not trivial code, but this is the Viterbi algorithm itself. Moreover we use logarithmic sums for probabilities to avoid numerical problems.

What the algorithm does is build a trellis, a special kind of graph. For every step t we calculate the most plausible sequence of events (a path through the trellis) which ends up with the system in each of the possible states. When we reach the end of the simulation, we take the most plausible state of the system and take the path that led to it as our estimate of what happened.

To avoid memory usage explosion, we do not actually store the paths themselves in the nodes of the trellis. Instead, in a node at tick t, we store a pointer to the previous node (at t-1) that led there. This is why we have to backtrack through the trellis to find the actual path:

Does this thing really work?

To check if this work, let's take the actual system out of the box and calculate how much it looks like our estimate:

The result I got with those parameters is 72% accuracy, to compare to what a naive random process would get (33%).

Why I love it

Let's go back to the title of this post: now that you know what it does, why is Viterbi's algorithm my favorite?

I admit that the elegance of the representation of the problem as a trellis is part of the reason, but mainly it's because of its implications. Think about it: fundamentally it is an algorithm that allows a machine to explain what it observes. Isn't that crazy?

Yes, it is. And because of that it has a whole range of applications, from advanced orthographic correction and speech-to-text to the decoding of convolutional codes used in voice codecs. And I suspect its potential has not been fully exploited yet.